User rating:
All an official info
Download:
thehelloneighbor.com is not an official representative or the developer of this application. Copyrighted materials belong to their respective owners
Get Game

Hello, Neighbor! is a Stealth Horror Game released on 8 Dec 2017 by Dynamic Pixels developer. To quote the immortal classic: there's something strange in the neighborhood here. Specifically at your neighbor's house. And this house at a closer inspection turns out to be one big maze of fear, filled with possessed mannequins, treacherous traps and vague clues that possibly may lead to an explanation: what the fudge is going on here?

The game, consisting of three acts in total, puts you in the shoes of an adolescent suburbanite, who at the very beginning hears a hair-raising scream from the neighbor's house. Naturally, you can't help but go and inspect the nature of such an unforeseen and unsettling incident. And that's where the gameplay shows its ambitious intentions to catch you off guard. 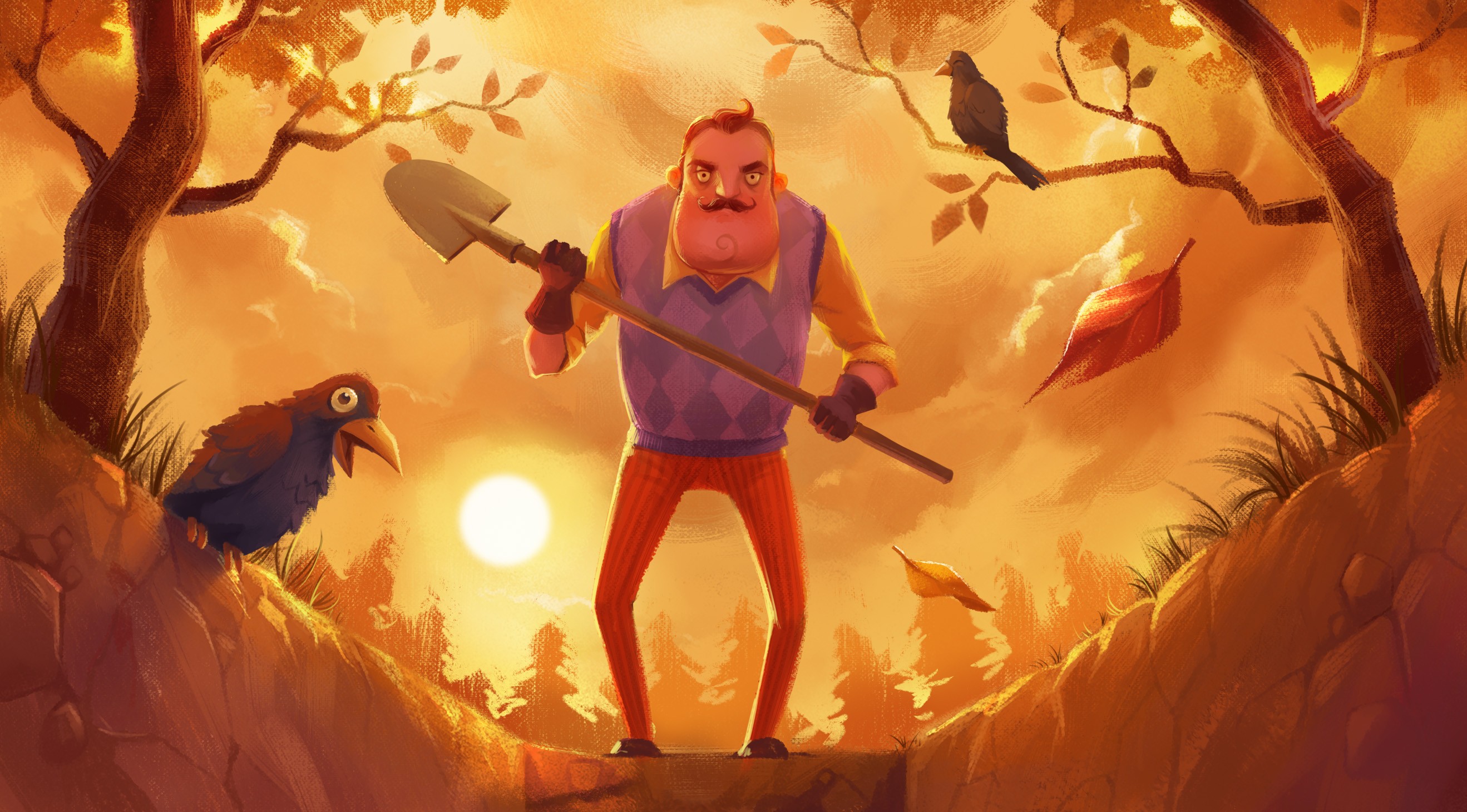 Here's what we've got:

At some point, it'll be next to impossible to hide/run away from the Neighbor. Try as hard as you want to be noiseless, there's a 90% chance that he'll hear you nonetheless. And even throwing domestic objects at him, which causes brief slowing down, won't help.
What's even worse, the Neighbor has no predictable patrolling pattern and it may take you a lot of time to wait for a moment to sneak into the area you want or pickpocket him.

And finally the cherry on top of that illogical pandemonium - solving all of the puzzles requires angelic patience. It's never about deduction, a sudden Eureka or a lucky guess. Error and trial and mule's stubbornness - that's pretty much it.

If Tim Burton was a game-designer

Hello, Neighbor has a catchy bizarre retro vibe in its visual aesthetics. Think of it as Toy Story mixed with a Hitchcock's movie, mimicking Metal Gear Solid and point-n-click puzzle games from the 90's. 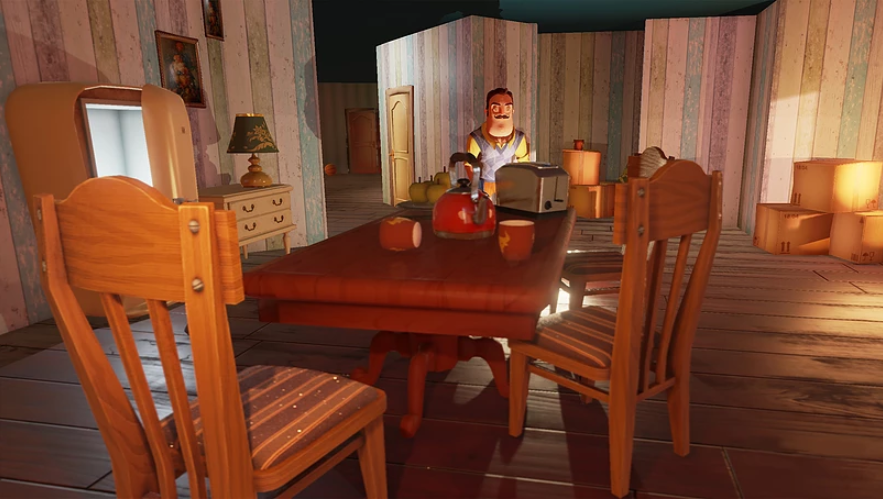 The levels and characters do look like misshaped decorations and figurines sculpted out of play dough but they are remarkably well animated and show no muddiness at all. And if you compare Hello Neighbor PS4 with the PC or with Hello Neighbor Mac version - you won't see a tremendous difference regarding fps.

The sound design is one of the central elements in the game. There is no background music to divert your attention, while you're on the mission. And every little sound - footsteps, clocks ticking, TV-show in unknown language, Neighbor's laughter - they help you navigate through the house and let you know whenever the Neighbor is getting closer to you.
And if you happen to get busted... An eerie sound effect of the mixed piano, organ and increased heartbeat will haunt you for a while afterwards.

Sadly controls in Hello Neighbor Xbox One are pretty clumsy at times. Although you use classic buttons, like L for movement or A for jumping, they require specific manipulation for every specific situation. Hello Neighbor PC is plagued by the same problem.

Luckily, the only retaliation you face, whenever you get caught is being thrown out of the Neighbor's property. And your inventory items won't even be confiscated.

The game's AI seems to be smart but it's only an illusion - it always investigates the routes you use the most, therefore avoiding traps and creating diversion can be easy. Make the Neighbor chase you around the house a couple of times in a row. Then sneak into the house and run the water in the bathroom to make your adversary run in circles around the building, fruitlessly searching for you.
To procure the Key in the very beginning:

To deactivate the bear traps just throw an item at them. At some point you'll need to find a Wrench to progress further - it can be obtained:

To freeze the pool of water:

Or simply go to the boiler facility and switch the heat off to achieve the same result.
To get the shovel:

Also, there's a glitch that sometimes allows you to get rid of the Neighbor for good. For that purpose force him into chasing you all the way to your house, run inside the house and if he jumps through the window to catch you - he'll get stuck there hopelessly.
P.S. In case you'd like to have the game with you wherever you go, you can:

Hello Neighbor: Hide and Seek is the prequel to the Hello, Neighbor! game. Available for PC (only on Epic Games Store), iOS, Xbox, PS4, Switch platforms. Sign-up at developer's site to get a download link for Hello Neighbor Hide And Seek's Demo (Alpha version).

Secret Neighbor is a Multiplayer Social Horror game set in the Hello Neighbor universe. Available only for PC at Steam (add the game to wishlist) or sign-up at official site get an Alpha version.

For the craziest fans, developers represent Hello Neighbor's Favorite Songs features 11 original songs by Rockit Gaming. You can get it on Steam as a separate product, there and in conjunction with the main game.

With all its imperfections, Hello Neighbor has a lot of potentials - the game isn’t just there yet. It’s not a legit horror, more like a weird puzzle game. And it definitely needs to assist the player at least a little, so the gameplay won’t turn into a blind charade.
But if you have the patience of a saint, a knack for bizarre mysteries and enormous curiosity - it might just work for you.

Hello Neighbor tries too hard to be an eerie horror mystery game. At some point you can tell that the game actually neglects the player, making you repeat the same quest over and overturning the game from fun bizarre adventure into an obnoxious trial of your patience.

This links follow to webpage, where you will find links to official sources of Hello Neighbor game. If you are Windows PC, Xbox One, PS4, Mac, Android or iOs user, then just click to button below and go to the page with links. Please note that this game may ask for additional in-game purchases and permissions when installed.

Get Game
Hello Neighbor Merch
Order Now
Latest Posts
By continuing to use this site, you agree to our use of cookies, which we use to improve our content, analyze site performance and to deliver personalised content. Click here to learn more.
Accept